A downloadable game for Windows and Linux

Our work in progress, Pre-Alpha, referred to as Creative is a proof of concept tech demo which is equipped with the tools to experience building and multiplayer in a single biome. It has limited features but represents the progress we’ve made and how the game looks and feels. We will continue to update it free of charge as we develop the paid Alpha.

Outworlder is the maiden project of Igloosoft Games, a newly founded indie game company consisting of experienced developers primarily residing in the Eastern US. It will be released on Windows, Mac and Linux.

Outworlder is an open-world sandbox adventure that will follow the player on their journey from a lone survivor of a shipwreck to being the leader and protector of a burgeoning spacefaring colony. You will begin on a cold, hazardous world, and will quickly have to navigate the various elements and dangers of a hostile alien environment while learning to farm crops, tame wildlife and keep livestock as you find the survivors needed in order to eventually launch your adventure into space.

There will be minimal narrative – instead, there will be a sprawling setting to explore and piece together at your leisure.

Tailor the game to your own needs

At Igloosoft Games, we recognise that certain parts of games aren’t for everyone, so we strive to make Outworlder a customisable experience that can be tailored to any player’s given needs. Want to just build things and avoid combat? Turn it off! Want more of a challenge? Increase the rate and strength of attackers. Want to just shoot things? Try the many spinoff multiplayer modes we have planned such as Capture the Flag, Deathmatch and Survival Challenge modes. Outworlder has also been designed to be accessible to modders, so players can further customise the experience.

Building has been fleshed out with many quality of life features to aid the process, as well as some features never tried before in games. We’re particularly proud of the addition of craftable Z-doors – you’ll now be able to place and build RPG-style compartmentalised rooms within your buildings. No more having to walk through people’s living rooms to reach the other side of a house!

Your main objective in Outworlder is to build and maintain a colony that can survive against the harshness and coldness of life in deep space. You will cross many obstacles on your journey, not least frequent raids from pirates and raiders, as well as some encounters of the otherworldly type.
To support a community, evolve and gain access to facilities and infrastructures. Construct power grids and a food supply, while appropriating defenses to deter the attention your fledgling community will no doubt generate.

Help your colonists help you

Unlike other games of the genre, the player will need to rely on other survivors to build all but the most rudimentary of items and objects. You’ll expand your base by attracting survivors – some will come naturally, some will need rescuing, and some can even be captured and turned to your side.

NPCs will each come with their own pool of items they can construct, and eventually you will need to have a functioning network of NPCs to build advanced items.

We will have all kinds of survivors that can be found. Including such professions as gunsmiths, doctors, cooks, radio operators, administrators and engineers. There’ll also be less useful ones like used car salesmen and video game reviewers that you’ll have to find a use for in your bases.

Naturally, these NPCs will need to be protected and each have their own requirements and needs.

In Outworlder, we understand that making a world feel alien isn’t as simple as making it multicolored and throwing some stitched together monsters in. That’s why we’ve gone to great lengths to develop a sophisticated world generation system that seeds believable worlds with distinguishable land features, thoughtful color palettes, compelling cave systems and uniquely designed wildlife and ecosystems. Some of these worlds will call for a change in gameplay style – certain worlds such as desert planets and radioactive worlds will call for special gear in order to survive, but the rewards for the additional risk are great.

The majority of creatures, plants and wildlife are individually designed with carefully defined behaviors to provide a deeper game experience. Creatures interact with each other, react differently to the players, and exist within their own ecosystem which can be exploited by the player. It’s truly a living, breathing world to explore.

In the full game, players will be able to commandeer ships and bring their colonies to other worlds. Naturally, space is a big place and there’s more than just planets out there. Players will be able to visit space stations, moons and explore the wrecks of long -abandoned starships. To facilitate this, there will be a wide range of ships of varied layouts and classes available to buy and sell, complete with their own facilities such as orbital weapons, hangars and medical bays.

Transparency and maintaining good relations with our community is important to us at Igloosoft Games, so we will be developing the game using a modular approach in order to simplify development and avoid doing everything at once. This allows us to release playable milestones for those who pre-order the game and want to see its progress. We feel this is the best compromise between transparency and giving buyers something to play early if they desire.

Pre-ordering will grant access to the pre-alpha version of the game and all of its updates. The pre-alpha will evolve into the full game described, but at first will take place on a single world in order for us to focus on the primary gameplay mechanics, before expanding to other world types and eventually allowing travel as the game develops. On release, everyone who pre-ordered the game will receive a copy of the full game.

We welcome and foster an active community, please come see us at our discord channel where we are most likely to see any of your questions or suggestions (or just come say hi!)

Our official Outworlder forums are now live! Join us and talk with staff and other outworlders. We highly recommend that all people interested in Outworlder come over to our official forums.

Join us on the Forums! 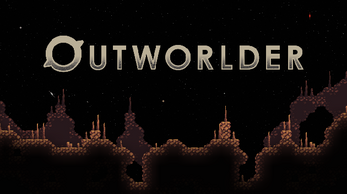